Premature infants receiving intensive care are exposed to a great deal of pain, and this pain causes damage to the child. Despite this half of the infants admitted to neonatal intensive units will not receive any pain relief, according to a new European study published today in The Lancet Respiratory Medicine.
– That is, no one assesses if the infant is experiencing pain or how much pain relief the infant requires, says Mats Eriksson, researcher at Örebro University. 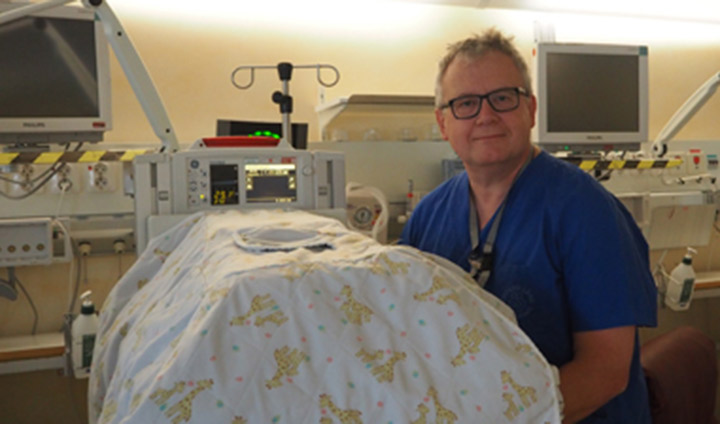 "Premature infants are sensitive to pain because their brain and nervous systems are still in development. But we cannot administer pain relief or sedation simply as a precaution, because pain relief at the wrong time will also lead to damage. Therefore, correct pain assessment is extremely important," says Mats Eriksson, a specialist nurse in intensive care and researcher in medical science, who has worked on this survey, together with Hugo Lagercrantz at the Karolinska Institute and Ricardo Carbajal from Université Pierre et Marie Curie in Paris, and in cooperation with researchers from 17 other countries.

The international EU project has investigated 6,700 premature infants in 243 neonatal intensive care units in 18 countries, the largest study of its kind. The study shows that just over half of the children received no pain assessment, and a fifth received no pain relief or sedative medication at all.

The basis for a good treatment

"It is astonishing that so many children were not assessed. Proper pain assessment is the basis for a good treatment. By checking the baby's facial expressions, heart rate and breathing, the amount of analgesic needed can be estimated," says Mats Eriksson.

It is uncertain if the 20 per cent of infants, who never received any pain relief, needed it. However, the study does show that in those cases the infant's pain was assessed, it was almost double so likely that the child received opioid analgesic such as morphine, or sedative drugs. On the other hand, the earlier a premature child is born, the less likely the child will receive analgesic or sedative drugs.

"20 per cent of the infants never received analgesia, and it is quite likely that many of them may have needed it at least at some point," says Mats Eriksson.

Pain may lead to behavioural changes

"In Sweden, we have made considerable progress. We are quite apt at pain assessment and at adapting treatment. We are also good at using alternative methods, such as relieving pain with a sucrose solution or with skin-to-skin contact with a parent. In this way we can relieve pain for the infant without using excessive analgesia or sedatives."

A good balance between analgesia and sedatives makes it possible to avoid future problems. Experiencing a lot of pain as a newborn may lead to behavioural changes with regards to pain later as an adult. That is, that one is quite simply being more sensitive to pain. In addition, many children develop attention and concentration problems, perhaps developing ADHD.

But there are significant differences between European countries regarding pain assessment and pain management. For example Greece stands out by providing much less analgesia than other countries.

"The goal is that all children should receive similar treatment, not simply based on chance, traditions or what an individual doctor believes or doesn't believe. There are international guidelines, but they are old and need to be updated. The next step is to develop common European guidelines."