It took 20 years from concept to publication. Jeff Hearn, guest research faculty professor at Örebro University, recently had his book "Men of the World" published.

"The book is experimental to a greater extent than my previous books, they have been much more focused, and I would not have been able to write it 20 years ago," he says, pointing out that there is an element of irony in the title.

In the book, Jeff Hearn has combined his fascination for geography with his experience as a researcher across a range of disciplines and it examines gender aspects of globalisation, the transnational world which still today belongs very much to men. It is through these critical glasses the book title "Men of the World" should be read. 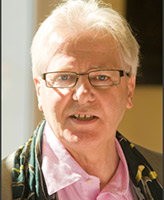 Following his first degree in geography, Jeff Hearn studied urban and social planning, sociology, and organisations studies. He has been a professor of social policy, sociology, management and organisation, as well as of gender studies in four different countries, and is now a guest faculty professor based at the Centre for Feminist Social Studies and the GEXcel International Collegium at Örebro University in Sweden.

Jeff Hearn is reluctantly using the concept of globalisation in his book since its definition may embrace such opposing concepts as the global village, on the one hand, and the world dominated by multinational corporations, and against which the anti-globalisation movement is rallying, on the other.

"Gender analysis is often lacking in disciplines such as economics, history and political science, but also within social science, the humanities, medicine, science and technology. There is so much to be done here, also by shifting focus to the global South," he says.

The second chapter of the book contains accounts of events from the author's own life, linked to various places in the UK, Ireland, Finland, South Africa and Sweden. At the same time, Jeff Hearn is telling the story of his own intellectual journey, influenced by science, politics and day-to-day existence.

"It is an unusual book and not academic in the conventional sense – and yet it is highly academic," says Jeff Hearn.

His personal scholarly journey brings him to the final chapter's discussion on "the abolition of men", as a category of power, as with those men that keep patting each other's backs in the workplace, at bars, within academia, within political parties and business.

But it is not a question of exterminating men, regardless of how you define masculinity.

"It is about questioning and rethinking our view of transnational men, even if critical studies on men and masculinities have developed a lot over recent years," says Jeff Hearn.

"Men of the World", published by the international academic publisher SAGE, is based on Jeff Hearn's own research on science, violence, war, multinational corporations, the world of finance, policy-making and politics, activism, migration, the environment, information technology, and sexualities.

"No doubt, it will annoy some people," he says, with mild amusement.