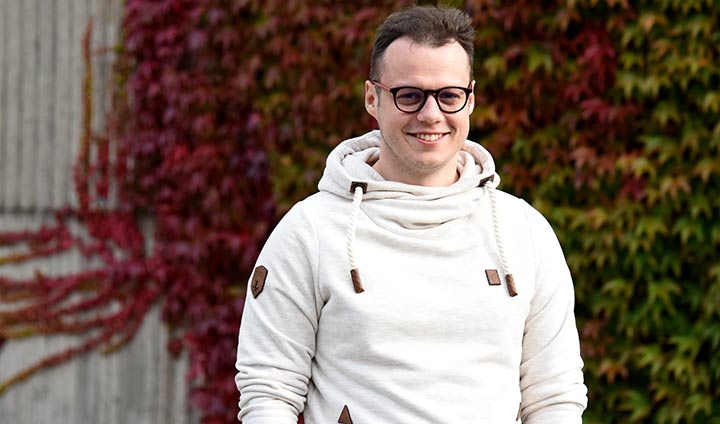 Already today there are robots in hospitals, schools, shops and in our homes. But for robots to function optimally in their interaction with humans, they have to be able to adapt to changes in their environment. In his doctoral thesis, computer scientist Tomasz Kucner describes a data-driven model that enables robots to fit in more easily in various settings.

Most robots today have the same modus operandi: they take in information, plan and then execute their task. In his doctoral thesis in computer science at Örebro University, Tomasz Kucner has further developed this method.

"Humans are constantly observing their environment, planning their actions based on changes in that environment. It is this behaviour I would like to recreate in robots," he says.

In contrast to existing methods that work on theoretical models of human behaviour and assumptions on where they tend to go, Tomasz Kucner's method learns patterns from observations, and makes it possible for a robot to perform the right actions also based on information about places it cannot currently see. Consequently, the model enables robots to anticipate certain events – just like humans.

"I was particularly interested in building models that attempt to teach robots how objects move in an environment. And the more data we have, the better models we can build," says Tomasz Kucner.

Adapting to the flow

When the model was tested on robots, Tomasz Kucner saw that they were able to adapt to the flow around them. In other words, robots turned out to be aware of how to move in an environment without getting in the way of humans.

"We could also see that robots, as a result of the information given about the flow, were able to identify more efficient routes quicker."

These two features make the model incredibly useful in various environments, even those with no well-defined traffic rules, such as a town square or an airport.

"Unlike for instance self-driving cars, where we have traffic rules to adhere to, this model works for settings that lack such rules. The robot has to learn how to act in an environment using data that is specific for that location," explains Tomasz Kucner.

The findings from this study may be useful within several different fields. Service robots at airports is one example. The robot may in that kind of setting be able to both find the most efficient route from A to B and move discreetly without getting in people's way.

"The model may also be used in drones programmed for instance to detect gas leaks. Data on air flow enable drones to fly in a more energy efficient way," says Tomasz Kucner and continues:

"Robots can help us with many dangerous and tedious tasks. But it will only happen once we are comfortable having them around. Having robots following the flow in an environment is an important step in that direction."