Reducing the knowledge gap on climate change and how we live

For many people climate change is an abstract, remote threat – it is not happening now, and it does not affect my life or people around me. Moritz Gubler researches climate change and education, and how the gap between knowledge and behaviour can be reduced. 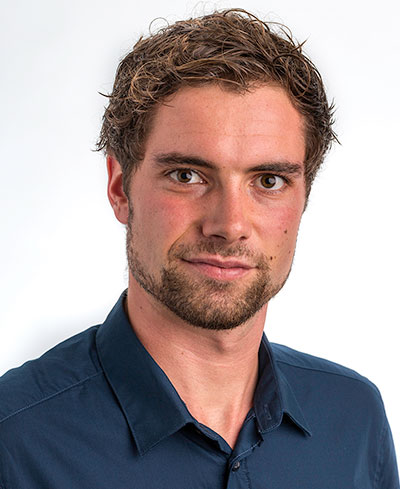 “Take the example of the youth between 18 and 24 in Switzerland. Although their generation has tremendous knowledge about climate, it is precisely this age group that travels by plane the most. Despite the fact that reduced airtravel is the most effective way of reducing their CO2 footprint,” says Moritz Gubler.

Listen to Moritz Gubler on the podcast PsychÖ, which is produced by psychology researchers at Örebro University.

He has just spent two months at Örebro University working with Maria Ojala, a psychology researcher.

“She is among the very few researchers in Europe who are working with young people and climate change. I'd read about her work and had the chance to come here as part of my PhD programme. It was the perfect opportunity,” says Moritz Gubler.

He is not a psychologist. Instead, he has a Bachelor’s degree in geography and has worked as a meteorologist. He also has a Master’s degree in climate science from the University of Bern, where he is also doing his doctoral studies.

He is studying what he calls the psychological distance, which makes climate change feel like a remote threat and which may hinder us from changing our behaviour.

“There are four reasons for this: the geography, time, a social dimension and uncertainty,” explains Moritz Gubler.

Pictures of polar bears drowning or islands at risk of sinking under the ocean produce a feeling that these things are happening somewhere else. Similar major changes that might be expected to occur and closer to home, still lie further off in the future. In other words, for most people, climate change is not happening here and now.

“Also, people usually don’t know or cannot imagine what it means for them if the temperature increases by one or two degrees. One can not really imagine all the impacts that are related to that,” says Moritz Gubler.

But research shows there are differences between younger and older generations. Climate scepticism is lower among young people.

“My studies that more than 80 per cent of young people agree that climate change is something that is definitely happening and that it is happening right now, while some 5 per cent are uncertain if it is true. Today’s youth is the first generation to grow up with the reality of climate change,” says Moritz Gubler.

Some of his research concerns what education strategies might change attitudes and behaviours. School classes will work with two different sets of lerning materials. One  is about climate change in their home town of Bern, Switzerland and the other about impacts of climate changein Singapore.

“We want to study if the perceived psychological distance, attitudes, and behaviours change when what they are learning is connected to their own town. By bringing climate change closer to young people.”

Proximity may play a significant role in increasing motivation. Research has shown this in previous studies among adults, but it has not been studied among young people. In his survey among 580 adolescents, he found that concerns about climate change, a key variable for action, was closely linked to the perceived psychological proximity of climate change.

“So, if climate change is perceived as definitely happening, and it’s occurring here and now, and it affects me,” says Moritz Gubler, who would like to extend the study to several European countries to see which relationships may exist there.

3)    Social similarity – It is not happening to people like me or people I know.

4)    Hypothetical – What is going to happen? Or will it ever happen? Is it a real threat?