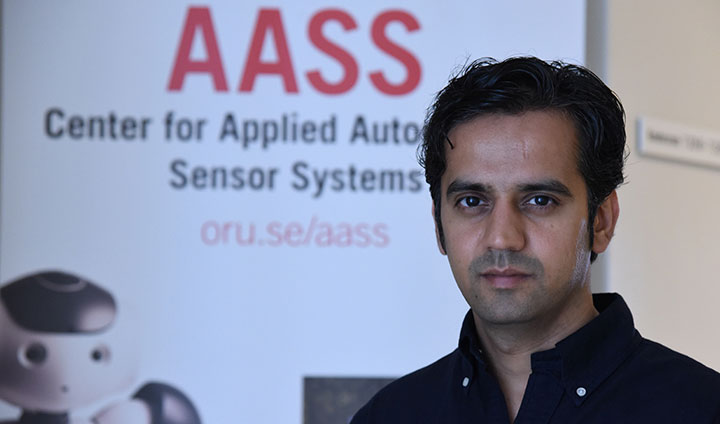 “Research in artificial intelligence imitates the human ability to draw conclusions,” says Mehul Bhatt, who is a new professor in computer science at Örebro University, and funded by the Knowledge Foundation (KKS) and Enfo AB. He wants to ease the interaction between man and machine.

”We have made an excellent recruitment with funding from KKS, reinforcing that Örebro University and AASS is attractive to leading researchers from around the world,” says Amy Loutfi, Professor at AASS, Örebro University.

This year Örebro University had all its applications granted for strategic recruitment from the Knowledge Foundation (KKS).

“My research is about understanding how humans perceive their surroundings. We call this spatial cognition and we use this knowledge to develop artificial intelligence and better technology.”

Researchers are, for example, examining human eye movement i various situations. This information can then be used to develop autonomous systems which can interpret and adapt to humans.

There is a great demand for research about this. Film producers want to know where the audience is looking at the screen in order to work more efficiently with special effects. Architects want to avoid people getting lost in big buildings. The car industry wants to understand how self-driving vehicles can function in traffic.

“People walking or bicycling seek eye contact with car drivers to confirm that they are seen. We interact with each other in subtle ways. If we can get a better understanding of how these processes work, then we can create better autonomous cars,” says Mehul Bhatt.

Working in Germany, he was involved in the construction of a large hospital. Architects and researchers from several different disciplines worked together to design a building where people would feel comfortable.

“It is easy to get stressed in large buildings, like hospitals or airports, and to get lost. There is a great deal that we can do to change this.”

Now he has left Germany for Sweden and is part of the research environment Centre for Applied Autonomous Sensor Systems, or AASS, at Örebro University.

“I don't see myself only as a robotics researcher, so I feel that I can contribute with a new perspective. It is a strong group that wants to expand.”

His journey brought him to Sweden from Mumbai in India, via La Trobe University in Melbourne, Australia and University of Bremen in Germany.

“My undergraduate degree is in economics, but I got tired of it. Instead, my interests in computer science grew. I taught myself how to program and became particularly interested in artificial intelligence.”

Independent study got him only so far, so he applied for a Master's programme in information technology in Australia.

“Since I did not have any undergraduate qualifications in computer science, I was given the chance to present my knowledge and to affirm my ability. It went well, and when I was finished with my Master's degree, I received a scholarship to continue as a doctoral student at La Trobe University in Melbourne.”

As he approached the end of his doctoral studies, researchers at the University of Bremen contacted him and inquired if he would like to come as a visiting research fellow for eight months. He stayed on for eight years before accepting the offer from Örebro.

“I have heard very good things about Sweden and Örebro University. That it is a nice country to live and work in. With a good education system and good health care. I have been warned about the winters, but since I used to live in northern Germany, I think it will be fine. But come and ask me again in the spring.”