Future robots will assist the elderly while adapting to the culture of the individual they are caring for. The first of this type of robots are now being tested in retirement homes within the scope of "Caresses", an interdisciplinary project where AI researchers from Örebro University are participating.

Caresses is an international, multidisciplinary project whose goal is to design the first robots that can assist older people and adapt to the culture of the individual they are taking care of. The project is funded by the European Commission and the Ministry of Internal Affairs and Communications of Japan. In total, the project has received funding of 2.5 million euros.

The project started at the beginning of 2017 and will completed in February 2020.

“Already today, robots are present in our lives. They’re found in our schools, hospitals, our homes and businesses, and we believe that if they are also culturally competent, they will more easily be accepted by the people they interact with,” says Alessandro Saffiotti, Professor of Computer Science at Örebro University.

For two years, he has been working together with researchers from Europe and Japan to add cultural skills to a robot – a world's first. This means that the robot may adapt the way it moves, talks, gestures and how it suggests appropriate topics of conversation depending on the individual it is interacting with.

“The idea is that robots should be capable of adapting to human culture in a broad sense, defined by a person’s belonging to a particular ethnic group. At the same time, robots must be able to adapt to an individual's personal preferences, so in that sense, it doesn’t matter if you’re Italian or Indian,” says Alessandro Saffiotti. 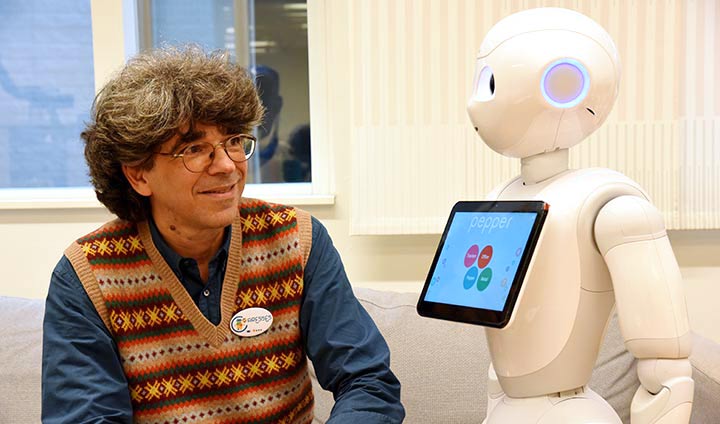 Alessandro Saffiotti is convinced that robots in the future will play a more prominent role in our lives. Therefore, their ability to take into consideration cultural differences will be all that more essential.

These robots will now be tested by the elderly from diverse cultural backgrounds in retirement homes in England and Japan.

“We’ll be examining if people feel more comfortable with robots that take into account their culture and if their presence increases the quality of life of the elderly,” said Alessandro Saffiotti.

This newly developed type of artificial intelligence, which allows robots to adapt to the culture and habits of different people, should be able to be installed in all types of robots. The particular robot being tested within the framework of Caresses can remind users to take their medication, hold a simple conversation and encourage them to stay active and to keep in touch with family and friends.

“The testing of robots outside of the laboratory environment and in interaction with the elderly will without a doubt be the most interesting part of our project,” he says.

A natural part of our lives

Alessandro Saffiotti is convinced that robots in the future will be more complex and play a more prominent role in our lives. Therefore, their ability to take into consideration cultural differences will be all that more essential.

“It will add value to robots intended to interact with people. Which is not to say that today's robots are completely culture-neutral. Instead, they unintentionally reflect the culture of the humans who build and program them.”

Culturally competent robots have other advantages too, such as the economic aspects.

“Companies should also be interested in selling robots to people of different cultural backgrounds in different countries,” says Alessandro Saffiotti.