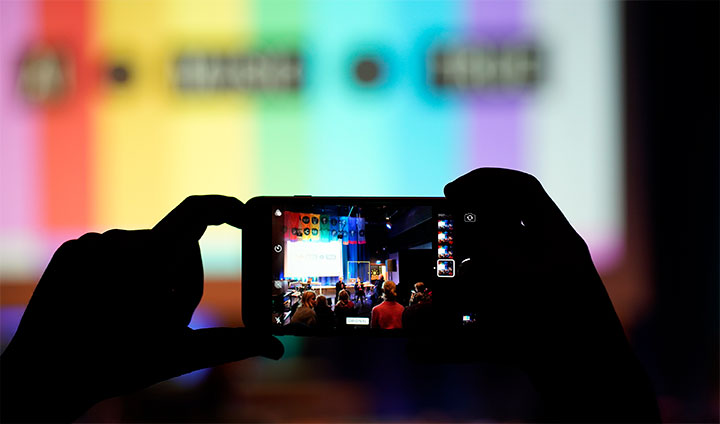 On Saturday evening, participants presented the results of the two-day workshop.

Some 70 musicians, AI researchers and students came together at Örebro University this weekend to create innovation on the theme “Humans in da loop – AI + music = true”.
“For me, this event is a testament to what can come out of interdisciplinary interaction. It was amazing to see the creativity and openness of the participants,” says Amy Loutfi, pro-vice-chancellor for AI at Örebro University.

Music Tech Fest, MTF, is an international event run by digital innovator Michela Magas and former professor and music producer Andrew Dubber. The idea is to bring the music industry and academia together to provide a creative space for new thinking and innovation. 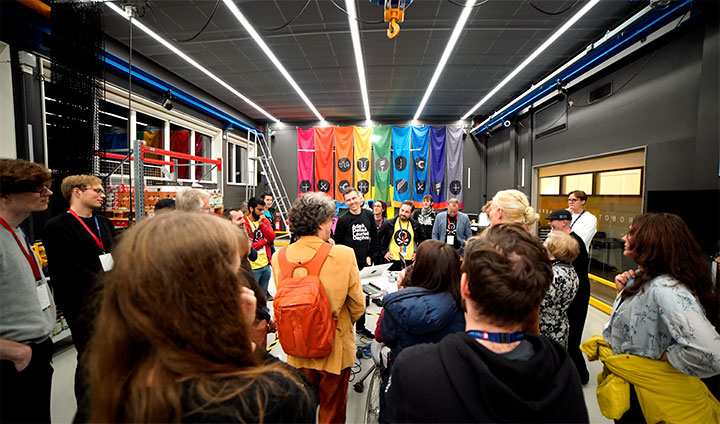 One of the elements of Music Tech Fest was the “AI lab”, where AI researchers from the university took part.

“I have attended a number of Music Tech Fests through the years, so I’m part of the family. But this is the first time I have been involved in a trackathon. I’ve been a music producer for over 30 years, so I hope I’ll be able to mentor the students,” says Graham Massey.

He had brought a number of tracks that the students could use as a basis for their songs during the Trackathon. Graham Massey was banking not only on inspiring the students but also on being inspired himself. 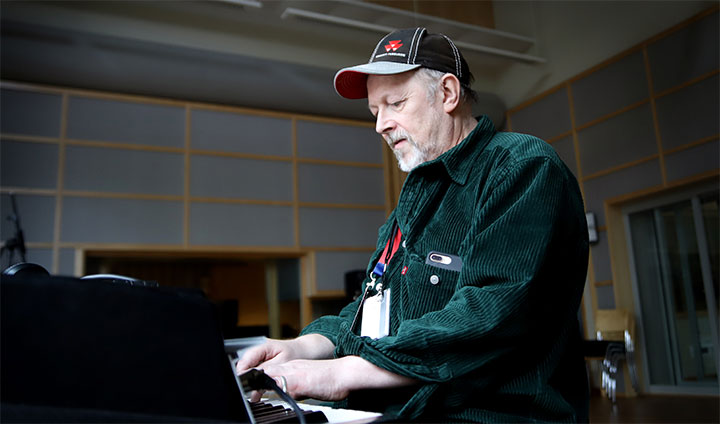 British artist and music producer Graham Massey was one of the guests.

“I am very interested in new ideas within music. That’s what’s so great about Music Tech Fest – that you bring together a whole spectrum of people involved in the music industry, from innovators, lawyers and businesses to artists. Often, people just keep to their niche and are not really in touch with people from other parts of the industry. Here is an opportunity for everyone to come together and collaborate. New thinking happens when disciplines meet. I always leave Music Tech Fest with 500 new ideas,” he says.

Tim Larsson, part of the songwriting team Play Production, was there to coach students in their songwriting.

“It’s fun doing new stuff, and I feel that people coming together can get things going that are so exciting. I also like the intensity of this event. Many times I find that the best songs are those that are written under pressure.”

Have you seen AI and music being combined before?

“Never, so I am super thrilled to see what will come out of this.”

“More people will discover Örebro for its music scene”

Åke Lundström, MD of the Live at Heart music festival, was also one of the participants at Music Tech Fest. To him, the event is a way of consolidating Örebro’s position as a town with a vibrant music scene.

“We think it’s great that Music Tech Fest has come to Örebro. The more of these events we attract, the more people will discover Örebro for its music scene. But it also means that we bring the world to the musicians who actually live and work here, without them having to go themselves.” 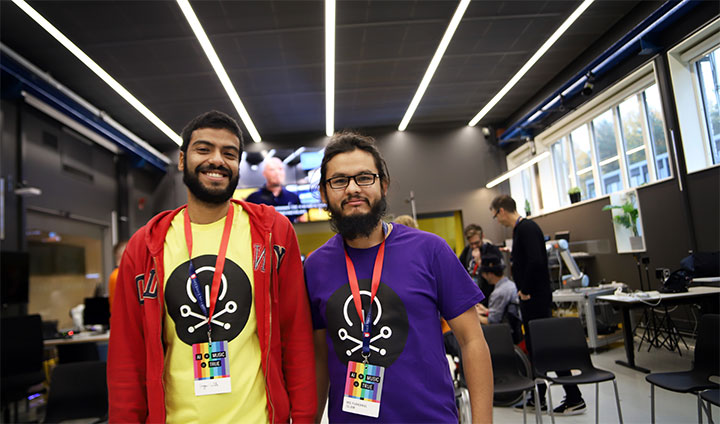 Steffen Cantillo from Colombia and Furkanol Islam from Bangladesh took part in the MTF AI lab.

Student Steffen Cantillo from Colombia is doing a Master’s degree in robotics and artificial intelligence and took the opportunity to take part in the MTF AI lab.

“Attempting to integrate music with AI sounded very interesting, I thought. I’ve seen examples of how you can generate lyrics using AI. That caught my attention and I felt that I wanted to know more and see “how deep the rabbit hole goes”, he says and continues:

“This is a chance to see more of the technology and to find out what kind of career paths are available. We also get to see a part of the music scene, how it can evolve and integrate with various technologies, such as AI. It’s also fun to see that everyone comes here with a common goal, no matter what their background is. Differences make us stronger,” says Steffen Cantillo. 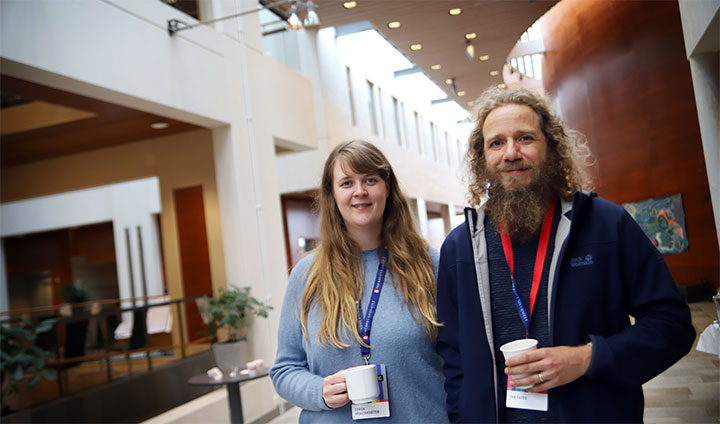 Eyrún Prastardóttir, a computer scientist from Iceland, and Tim Yates, a musician from London.

“A challenge rounding up this level of expertise”

At lunch on Friday, Eyrún Prastardóttir, a developer and computer scientist from Iceland, ended up at the same table as Tim Yates, a musician from England. They struck up a long conversation.

Tim Yates is one of the people behind the innovation Loopfree – an accessibility system that allows the user to create music loops with a wireless connection at, for instance, live performances. Loopfree was developed during last year’s Music Tech Fest in Stockholm. 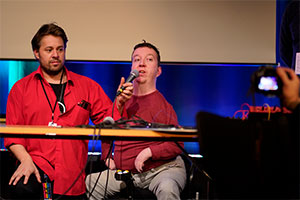 Tim Palm, one of the creators of Loopfree.

“From my point of view, it’s always interesting to see what possibilities there are for further development of Loopfree. That’s why I’m here, to meet all these people from different disciplines and backgrounds and to see how they use AI. That way, maybe I’ll be able to find ways of using it in my work. It’s a challenge rounding up this level of expertise in one place,” says Tim Yates.

“MTF is an amazing arena for meeting new people with different backgrounds. Everyone wants to share and learn from one another.”

“A couple of really good innovations came out of the event”

After alternating lectures, workshops and concerts, participants got to present their results on Saturday evening. Afterwards, Amy Loutfi, pro-vice-chancellor for AI at Örebro University was content that Music Tech Fest was a successful event. 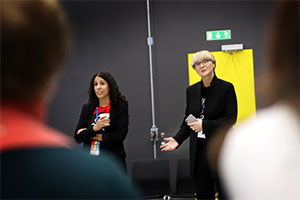 “A couple of really good innovations came out of the event. The theme ‘Humans in da loop’, referring to how technology and humans interact, really did cover all the ideas that were generated,” she says, concluding:

“MTF was really a new experience to learn from, and for me, this event is a testament to what can come out of interdisciplinary interaction. In that respect, MTF was even better than I had expected. It was amazing to see the creativity and openness of the participants, so next time, I think we should try to get as many students as possible from all different disciplines to take part.”