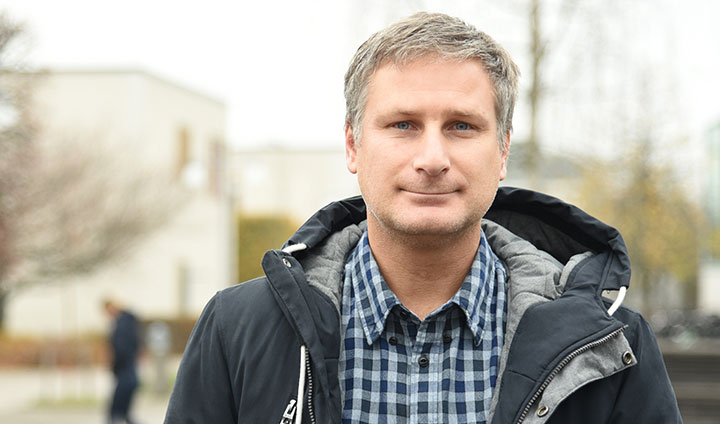 Jonas Persson is professor of psychology. His research concerns our memory – using technology that enables him to see what happens in our brains.

2002 Obtained his PhD in psychology at Umeå University with his thesis Brain activity associated with episodic memory: Similarities and differences between encoding and retrieval.

2008 Docent in psychology at Stockholm University

2018 Professor of psychology at Örebro University

“The ultimate goal is to find answers that in the future will make it possible for instance to halt age-related changes leading to dementia or Alzheimer’s disease. But every new small discovery is a victory in itself,” says Jonas Persson.

In his doctoral thesis, he examined what parts of the brain were activated when encoding information and then retrieving it from memory. He studied brain activity by having research subjects perform various memory tasks while the brain was being examined with a PET camera.

“As an example, the subjects were tasked with memorising a list of 20 words and we looked at what was happening in the brain while they were doing so,” says Jonas Persson.

When we are trying to memorise things, there is full activity in the front parts of the brain, as well as in the hippocampus. Jonas Persson has compared what happens when we learn, where the memories are stored, and the brain activity when we retrieve the memory information.

In his thesis, he worked with younger persons as research subjects, but more recently, his research has focused more on older adult’s memory and how our memory deteriorates as we get older.

“We’re interested in what happens in the brain and if you can explain memory loss with changes in the brain’s structure and function,” says Jonas Persson.

He and his fellow researchers have examined people’s brains using an MRI scanner and have seen that some parts change more than others – and among those are the frontal lobes and the hippocampus, which both play a key role in the memory process.

“Parts that, for example, control visual processing and are placed at the back of brain, however, stay relatively intact.”

“If we can find out which changes we should be observant of, so called predictive factors, then we’ll be able to identify those that are at risk of dementia or diseases such as Alzheimer’s.”

After obtaining his PhD and a brief sojourn as a postdoc researcher at Umeå University, Jonas Persson spent just over three years at University of Michigan, USA. He returned to Umeå, only to move on to Stockholm University and Karolinska Institutet. Ageing and the brain has been in focus since and one project in particular has permeated most of his research – the Betula project.

“It’s named after Umeå, the City of Birches. The Latin name of birch is Betula. The project studies ageing, memory and dementia,” says Jonas Persson.

Betula started in 1988 with persons aged 35 and older. 4,500 persons have been examined more or less every five years, some have dropped off and others have been added over the years.

“The project has made it possible to follow a large number of people over time. This is important as it has enabled us to study how memory functions change over the course of adulthood.”

With the help of funding from the Swedish Research Council, he set up his own research team with doctoral students at Stockholm University. They examined how ageing is related to positive and negative emotions and how that in turn affects our memory.

The goal is to take this further and examine how people with depression or people who have problems with excessive dwelling on negative information can get help in controlling their emotions. Moreover, Jonas Persson intends to take a further step and examine post-traumatic stress disorder.

“I hope to be able to build something new in Örebro where there’s long experience within developmental psychology but not linked to research on memory and the brain,” concludes Jonas Persson.