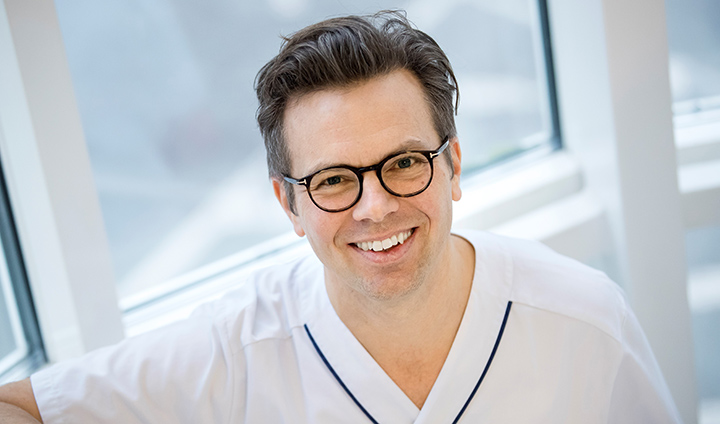 Jonas Halfvarson is professor of medical science with a specialisation in gastroenterology. He researches inflammatory bowel disease (IBD). The aim is to identify at an early stage, who may be developing the disease and how to treat these patients – leading to better care and enhanced quality of life.

2005 Obtained his PhD in medical science at Linköping University with his thesis Inflammatory bowel disease in twins; Studies of genetics and environmental factors

In Sweden, around 80,000 people have inflammatory bowel disease, such as Crohn’s disease and ulcerative colitis. IBD often develops early on in life, between the ages 15–35. It brings suffering for the individual patient and high costs for society.

“The goal of my research is to improve healthcare for people with the disease and enhance their quality of life.”

At the end of the 90s during his residency at the Department of Medicine at Örebro University Hospital, Jonas Halfvarson learned more about IBD as a research field. Today, he works with identifying biomarkers, which at an early stage, can identify individuals who are on their way to developing the disease, and predict who who are at risk of serious progression of the disease.

“Individuals who develop a serious disease require individualised treatment as soon as a diagnosis is established. That is why I want to also identify biomarkers which can predict how patients will respond to various drug treatments and which will give the desired effect in the long-term.”

Today, there is no simple test to identify who is affected by IBD. Instead, a comprehensive investigation is necessary to make a diagnosis. Jonas Halfvarson is working with national cohorts, where he follows patients from diagnosis and the initiation of medicinal treatment. Specimens are routinely collected from patients. Using various analytical methods, his research team maps out each individual’s profile regarding their bacterial flora, genetic make-up and immune system.

“The aim is to link these to the disease's onset and its future progression, and the responses to various pharmaceuticals.”

The findings, both of his research group and others’ point out that specific changes can be identified many years before the individual develops IBD symptoms. Some of these changes are a result of the individual’s genetic tendency to develop the diseases, while others are affected by risk factors in their environment.

“The twins studies, which were the basis for my thesis, are an important model for evaluating the significance of genetic make-up and the environment in this context.”

Jonas Halfvarson hopes that future doctors will have access to biomarkers that can determine persons inflicted with IBD, who is at risk of developing the disease and the optimal treatment for every patient.

“It will be a long journey. To ensure that the scientific discoveries can be translated into patient benefit in healthcare, a well-established collaboration between other leading researchers, patient organisations and companies is of great importance.”