Chronic inflammation is a potential consequence of some mucosal infections due to environmental contaminant or genetic predisposition. The Lactobacillus species are lactic acid bacteria that are important constituents of a healthy gastrointestinal and urogenital microbiota. Some lactobacilli strains have been clinically proven to be probiotics, such that they promote health when they are present in adequate amounts. One of the key health promoting properties is believed to be due to its immune-modulation characteristics. Intestinal health strongly influences many other organs/location in the body, including the urogenital system, by strengthening the body’s resistance to infection and regulating inflammation. We have established a co-culture model of monolayers of bladder epithelial cells together with immune cells in a trans-well system to evaluate the signaling from the epithelium to the immune cells. Our working hypothesis is that some lactobacillus spp can alter the inflammatory response by differentially interfering with cell signaling between the epithelial and immune cells.

One of our main focus is on the signaling molecules, chemokine CXCL8 and transcription factor IL-6, shown to be differentially transduced between the epithelial cells and macrophage-like monocytes when challenged by the probiotic L. rhamnosus GG and GR-1.  IL-6 can have either proinflammatory or anti-inflammatory properties and was modulated by lactobacillus through epithelial cells. The influence of L. rhamnosus on CXCL8 in macrophage like cells appears to require direct bacterial contact. We are mapping of the cellular pathways involved in this signaling to help determine the target mechanisms of probiotic Lactobacillus spp. 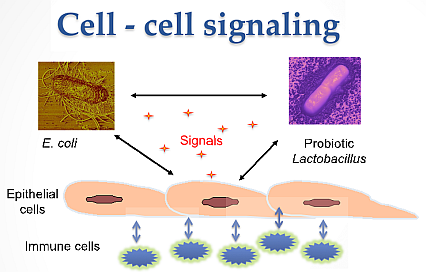